It might sound far fetched if you are not familiar with Minecraft but it's true - you can learn basic electronics in Minecraft and it is really easy to get started. It all starts with an in-game material called Redstone.

Redstone is a rock you mine in the game, you can think of it almost like copper - it is conductive and can be used to make circuits which in-turn can operate things like doors, pistons, lights and even explode TNT. Redstone is not too difficult to get your hands on, you simply need to mine down to levels 0-15 and you will quickly run into a pocket of ore.

To get started we need to head over to a Minecraft world in creative - and add Redstone Torch, Redstone Ore, Redstone Repeater. Redstone Comparator and a Redstone Lamp to your inventory.

With Redstone, blocks can be separated into four distinct categories:

Let's learn the very basics of how Redstone works - create the following in your Minecraft world. Place a Redstone torch a few blocks away from a Redstone lamp and connect the two by placing some Redstone ore on the ground. You will see that the lamp will light up - simple enough, right? The power from the Redstone torch is being transmitted to the Redstone Lamp which is causing it to be activated. You don't have to use a lamp for this, you could put any action block there (try TNT for some fun).

One of the problems you may already know about electronics is that power fades when you try to transmit it over long distances and this is true in Minecraft too. The maximum number of blocks you transmit power is 15 blocks - give it a try, make the Redstone ore path cover at least 15 blocks, like shown below.

As you can see, the block and our torch are still connected, but the lamp is not turned on. Too much of the power has faded along the ore, you can see this by how much the ore is glowing on the ground. There is a solution to this though, it's called a Redstone repeater and it will repeat the signal, extending it for another 16 blocks - try placing a repeater half way down the path.

One input is good, but what if you want two, this is where a Redstone Comparator becomes useful. This is useful when you want to, say, open a door when two levers are both activated, but not when only one is activated. Let's give it a try, create the circuit as shown below. It is two levers, both connecting to a Redstone Comparator, connected to the previous circuit.

When playing the comparator make sure you are facing forwards in the circuit, direction matters with this block! Let's try to switch on the left hand lever. Take a look at what happened, the Redstone lit up but stopped at the Comparator - this is because it is performing an AND operation which requires both levers to be toggled on. If we toggle the right lever we will see the door open.

That's the basics of Redstone! It's pretty simple to get your head around, but it takes a long time to master. We have seen some really extraordinary creations using Redstone - take a look below at some of the absurd builds.

You can build some really crazy things with Redstone! 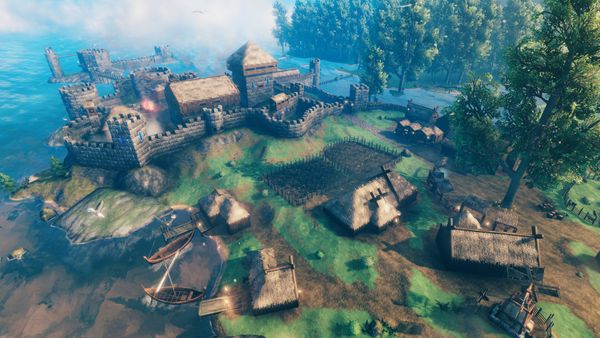 Valheim Hearth and Home expansion is set to be released on September 16th 2021 - and we're eager to dive right in and get playing!

Hi everyone, we're back for another monthly update - we've got quite a bit of news to share with you so lets dive right in.